All students applying for:

The ASET is made up of four components: 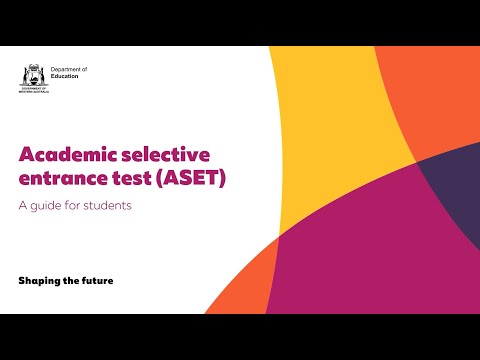 The tests are designed to identify students most suited for our Gifted and Talented Secondary Selective Entrance Programs. They identify a student’s potential, rather than acquired knowledge. We do not endorse nor recommend any form of private professional coaching or tutoring services.

The Academic Selective Entrance Test (ASET) Sample test is now available. The Sample ASET is aimed at the Year 7 intake, however can also be a useful tool for children applying for Years 9, 10 and 11.​​​​

​​​​​​​The Sample ASET is broken up into its four components:

There is also a Sample Answer Booklet which is identical to the one children will use on the day, as well as an associated ASET Tips Sheet.

The sample tests are provided as a guide to help applicants feel more comfortable with the test process as well as the:

Results of sample tests do not show how an applicant will score in the ASET and consideration will not be given for scores on sample tests or any other practice tests.

For the health and well-being of all participants, children who are unwell should not be brought to testing. The following may be considered reasons to request an alternate testing date or time.

Illness or misadventure leading up to the test

Parents of children who become ill or experience misadventure that will make them unable to sit the test on their scheduled date must contact GTSU on 9264 4307 prior to the test to discuss the potential for an alternate testing date.

Requests for an alternate testing date based on illness/misadventure will be considered on a case-by case basis and must include supporting evidence.

Illness or misadventure on the morning of the test

Parents whose children are sick or otherwise unavoidably unable to attend on the day of testing, must email gtsu@education.wa.edu.au within 48 hours of the original testing date to request an alternative date where possible.  Evidence in the form of a medical certificate or appropriate alternative for the date in question must be supplied. Additional travel to an alternate venue may be required due to the tight timeframe and limited venues.

All reschedules are at the discretion of the GTSU and will be limited due to the scale of the testing and the limited testing time-frame. Parent/carers are expected to plan in advance and reschedules will not be available for work conflicts, school camps/excursions/activities, non-state-level sporting events, participation in entertainment, personal preference or anything that is voluntary and/or avoidable.

A request for review based on sudden illness, incident or misadventure (including the misalignment of answers) can be made if there were unforeseen factors which occurred during the test which could have prevented the applicant from performing to the best of their ability.

A parent who wishes to lodge a formal review based on illness, incident or misadventure will have seven days from their child’s testing date to lodge an Illness, Incident or Misadventure Review Request form and which will be available on the website from the start of formal testing.

Matters considered valid grounds to lodge a request include:

Matters which are not considered valid grounds to lodge a request include:

Misalignment reviews involve a rigorous examination of response patterns on a child’s answer sheet corresponding to the answer key in conjunction with the Lead Supervisor’s Report.  Misalignments usually occur when child skips a question and puts the rest of their answers out of order on their answer sheet. Misalignment investigations are labour intensive and time critical and are undertaken by Australian Council for Educational Research (ACER).

All other reviews will be conducted by an ASET Review Panel who will consider the evidence provided in conjunction with the Lead Supervisor’s Report. The outcome of all Illness, Incident or Misadventure Review Requests will be communicated to families prior to the release of ASET Performance Reports.

A review based on sudden illness, misadventure or suspected misalignment may or may not result in a change to a child’s scores and impact a current or future offer of placement.